Baloch National Movement Central spokesman said that Pakistani forces are engaged in state terrorism for several days at Khuzdar in Occupied Balochistan which is highly condemnable. He said Pakistan military along with puppet Chief Minister Sanaullah Zahri’s and National Party’s run death squads have made the life of Baloch people a hell. In recent round of door to door operations women and children are being harassed, and forces are looting valuable things in Chandni Chok,

Quetta: Baloch National Movement (BNM) Central spokesman has said that we had already warned that Pakistan Army will intensify its operations against natives of Balochistan. Now that Pakistan Chief of Army Staff (COAS) refused to take action against protesters in Islamabad saying, "we can't use force against our own people", this makes a clear distinction between the people of Balochistan and Pakistan. On one hand the Army chief exerted to bring intensity on operations in Bal

Khalil Baloch, chairman of the Baloch National Movement, expressed concern over the rejection of the application of the BRP president Nawab Brahumdagh Bugti's political asylum. He disappointedly stated that instead of speaking against Pakistan's oppression, Swiss government is rejecting Baloch leaders case under the pressure of a country which is infamously known for spreading terror in the world. Recently Hafiz Saeed has also been ordered to finish the confinement. The we

Dr. Murad Baloch, the Secretary General of the Baloch National Movement (BNM), said in a press release that on Sunday puppet Interior Minister Sarfraz Bugti issued a verdict of Baloch’s genocide in the newspapers; actually confessing the ongoing genocide. Now the world institutions should take legal action against the state and its officials for these crimes against humanity. Sarfraz Bugti by declaring Baloch pro-freedom people as a terrorist and waging genocide is the blatan

Baloch National Movement and BSO-Azad jointly protested today in Toronto to express their anger over the recent enforced disappearances by the Pakistani security forces in which more than a dozen students and children were abducted from their home in Karachi, Sindh. World Sindhi Congress expressed their solidarity and took part in the protest. Baloch Students Organization – Azad Secretary General, Sanaullah Baloch and three other Central Committee members were picked up on No

Baloch National Movement chairman, Khalil Baloch in his statement has condemned ‘a lifetime ban’ on Merhran Marri and detention of his wife and children at Zurich airport by Swiss government. He said that the behaviour of Swiss government by imposing a lifetime ban over Baloch leader on false propaganda of Pakistan had stunned him, because the Western world claim their self as civilised nations, democratic and champion of freedom of expression. Switzerland is center of United

A protest held in Germany against Pakistani atrocities. BNM

Baloch National Movement's central spokesperson in his statement said that today a protest was held in German city of Düsseldorf against enforced disappearance of BSO (Azad) Secretary General Sanaullah Baloch, Baloch Human Rights Organization’s Information Secretary Nawaz Atta along with minor kids and other students. The protesters were holding banners and photos of disappeared Baloch people. The participants chanted slogans against Pakistani atrocities on innocent Baloch

Khalil Baloch, Chairman of Baloch National Movement, in a video message expresses his views about geopolitical importance of Balochistan and new situation in the region as well as the world. 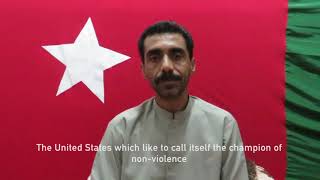 Abductions of women unites us, we know how to defend our honor. Khalil Baloch

Chairman of Baloch National Movement, Khaleel Baloch, in his statement said that abduction of Baloch women and children from Quetta and Karachi will only unite and energize the dispersed Baloch political forces. He said: ‘Baloch will defend their women and children at any cost. It is the time we unite all our power and give a strong message to the enemy that their cowardly acts will never be tolerated.’ He said at least 4 women and 15 children have been abducted by Pakistani

August 11th is the day of renewal of vows. BNM

46 people were forcibly disappeared, 2 Baloch refugees died and 11 were killed in custody-Dr.Nazir

BNM Netherlands protests against the killing of Baloch enforced disappearances

Dr. Nasim Baloch's letter to the Secretary General of the UN for intervention in Baluchistan

August 11th is the day of renewal of vows. BNM

46 people were forcibly disappeared, 2 Baloch refugees died and 11 were killed in custody-Dr.Nazir

BNM Netherlands protests against the killing of Baloch enforced disappearances