How the international efforts might succeed bringing peace in Afghanistan? By Rahim Baloch

How the international efforts might succeed bringing peace in Afghanistan? By Rahim Baloch (Dec 21, 2018) Soon after the horrific terrorist attacks of 9/11 the USA, on October 7, 2001, launched its "War on Terror" in Afghanistan against Alqaeda and its Taliban hosts. Later on NATO forces also joined the war on terror. UNO Security Council too endorsed US led NATO efforts against Islamic extremism and terrorism (which is beautifully termed as jihad) in Afghanistan. The US also

Chairman Khalil Baloch’s message to oppressed nations and the world

Khalil Baloch, the chairman of Baloch National Movement (BNM) expresses his views about current situation of Balochistan and the world, espe 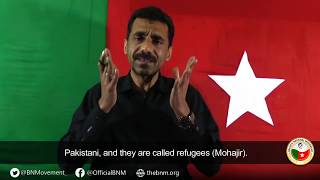 The Central Spokesman of Baloch National Movement in his statement says that world community, USA and its allies have put the world into danger by trusting Pakistan. The world powers are in vain hope that they would bring stability in Afghanistan and in this region by the help of Pakistan. For last eighteen years world powers have funnelled billions of dollars while chasing for the mirage, which resulted in the growth of the demon of terrorism. Pakistan has proved while usin

Dishonoring of our elders by Pakistan more exposes our slavery. Dr Murad Baloch

Dr. Murad Baloch, the Secretary General of Baloch National Movement, regarding the atrocities of Pakistan in Balochistan, says that Pakistan Army, paramilitary forces and other proxies are involved in undermining human dignity in Balochistan. Some days before a video clip became viral in social media, in which state sponsored death squad members are forcing an elderly man, Bul Sher, a resident of Mashkay, to hail Pakistan and Pakistan army; on contrary, the old man raises slo

Baloch National Movement organized a two day awareness campaign on 15th and 16th December in Berlin, Germany, against thousands of involuntary and enforced disappearances of Baloch political activists, social activists, students, women and children by Pakistani forces in Balochistan. The members of Baloch National Movement Germany zone and other Baloch political activists took part in the two days awareness campaign. The participants distributed leaflets and made aware the lo

BNM will run an awareness campaign in Berlin

We reject the findings of Pakistan's missing persons' commission. BNM

Dil Murad Baloch, the Information Secretary of Baloch National Movement criticized the inquiry commission report on missing persons. He said that Pakistani official and private institutions had trespassed all limits to make the case of missing persons controversial; the last days released statistics were an insult to the injuries of the families of the missing persons. He said , “all institutions of Pakistan, including judiciary are equally responsible for the genocide of Bal

Chairman Khalil Baloch’s message on the eve of Human Rights Day Khalil Baloch, the chairman of Baloch National Movement in his video statement on the eve of International Day for Human Rights applauded the struggle of Baloch women: “ My today’s message is for those brave mothers, sisters, small kids and for elder people of Baloch nation who are protesting in the extreme cold weather of Shal (Quetta) for their loved ones who are enduring tortures in Pakistani torture cells.

Khalil Baloch, the chairman of Baloch National Movement (BNM) delivering his message on the eve of World Human Rights Day. He elaborates the atrocities committed by Pakistani army and its secret agencies and criticises the silence of United Nations and world powers. 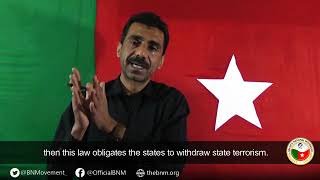 We call for sending a UN fact-finding mission to Balochistan-Dr. Naseem Baloch