Baloch National Movement's central spokesperson in his statement advises all zones and regions of BNM to hold references and programs in memory of Shuhda-E-Murgaap paying tributes to Shaheed Ghulam Mohammad Baloch, Lala Munir Baloch and Sher Mohammad Baloch on their 10th anniversary in order to draw the teachings of these great leaders; as well as the members of the party should hold programs while keeping the demand of time and struggle against the atrocities of Pakistan i

Killing Baloch people and burying them unidentified is a new increment in Pakistan's crimes. BNM

Baloch National Movement's central spokesperson said, in Quetta declaring 12-persons unidentified and burying them is a new increment in the list of Pakistan's crimes. For this purpose sensibly taking 27th of March to make the Baloch nation realize that they are slaves and the slaves have no fundamental human rights. The spokesperson said that Pakistan has made Balochistan a slaughterhouse. It has completely taken a serious humanitarian crisis and it is just because of the si

We accept Free Balochistan as a graveyard but not the slavery. Khalil Baloch to TAG TV

We accept Free Balochistan as a graveyard but not the slavery. Khalil Baloch to TAG TV If oppressed nations progress their one step towards coalition then we will proceed four steps towards them. Free Balochistan is acceptable for us in the shape of GraveYard but can't accept Pakistan's slavery. Chairman Khalil Baloch Tag TV: In Balochistan's escalating problem, what's the role of your organisation which is on frontline? Chairman: Thanks to you, Tag TV and your entire team. I

Human rights organizations must take action against abduction of Zahid Baloch and others. Khalil Bal

The central spokesman of Baloch National Movement in his statement says that BNM will observe 27th March as Black Day. All zones of BNM in Balochistan and Germany, UK, South Korea, Australia and Greece will hold references and protests with respect to 27th March. The spokesman stated that 27th March is Black Day for Baloch nation, when newly established country Pakistan, advanced toward and occupied Balochistan with the power of military. Till that day Balochistan remains a c

Baloch nation is facing worst genocide of its history. Pakistan turned Balochistan into a slaughter house. It is responsibility of responsible international organizations to take immediate actions against Baloch genocide to save Baloch nation from this brutality. Baloch National Movement's central information secretary Dil Murad Baloch released report about human rights violation in Balochistan saying aggression of forces seen to be worst in this month. Pakistani military ca

Pakistan's call for ban on extremist groups is to deceive the world: Khalil Baloch

Khalil Baloch, the chairman of Baloch National Movement called the ban an “hoax” on religious extremist groups by government of Pakistan, which is “an attempt to deceive the world.” The purpose of this delay “to buy time for further terrorism,” He expressed his concerns that if India did not take regressive measures, it would be tantamount to provide more chance of doing terrorism. The world must not believe on superficial announcement of Pakistan. And the world should take p

BNM activist questions Pakistani ambassador to US. on persecution of Baloch people

BNM activist Nauroz Baloch questions Pakistani ambassador to US. Dr. Asad Majeed during a discussion on ''Pakistan's policy responses to recent developments and his priorities for the US. - Pakistan relationship''. The event took place in Washington on Monday March 4, 2019. 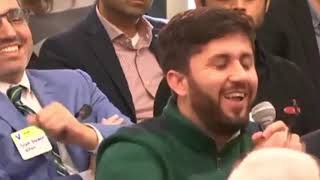 We condemn the raid on Haji Razzaq house and abduction of Baloch students. BNM

Baloch National Movement's central spokesperson has condemned the raid on the house Haji Abdul Razzaq, a journalist, intellectual and former information secretary of Baloch National Movement, and disappearances of Baloch students in arbitrarily arrest by security forces. The spokesman stated that for last several years state had been working on the policy of collective punishment and targeting the families of Baloch martyrs which had been relentlessly going on. He informed th

We call for sending a UN fact-finding mission to Balochistan-Dr. Naseem Baloch